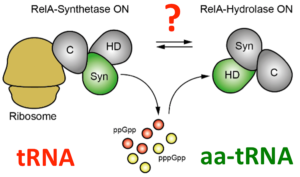 The stringent response (SR) is a central bacterial adaptation mechanism, mediated by the nucleotide-based second messengers, (p)ppGpp. The RelA protein translates amino acids limitation into a (p)ppGpp signal to adapt the bacterial metabolism. RelA possesses a strong ribosome-dependent (p)ppGpp synthetic activity that is activated by amino acid starvation via direct sensing of the deacylated tRNA in the ribosomal A-site. In our project, we aim at an in-depth mechanistic and structural understanding of RelA and its functional role during the SR.